Boyz II Men Their rise to success is a dream come true made possible by hard work- a brotherly bond and an unimaginable talent and desire.  Multiple GRAMMY Award-winning vocal group Boyz II Men - at The Mirage Hotel & Casino are on sale now. New show dates to come soon! 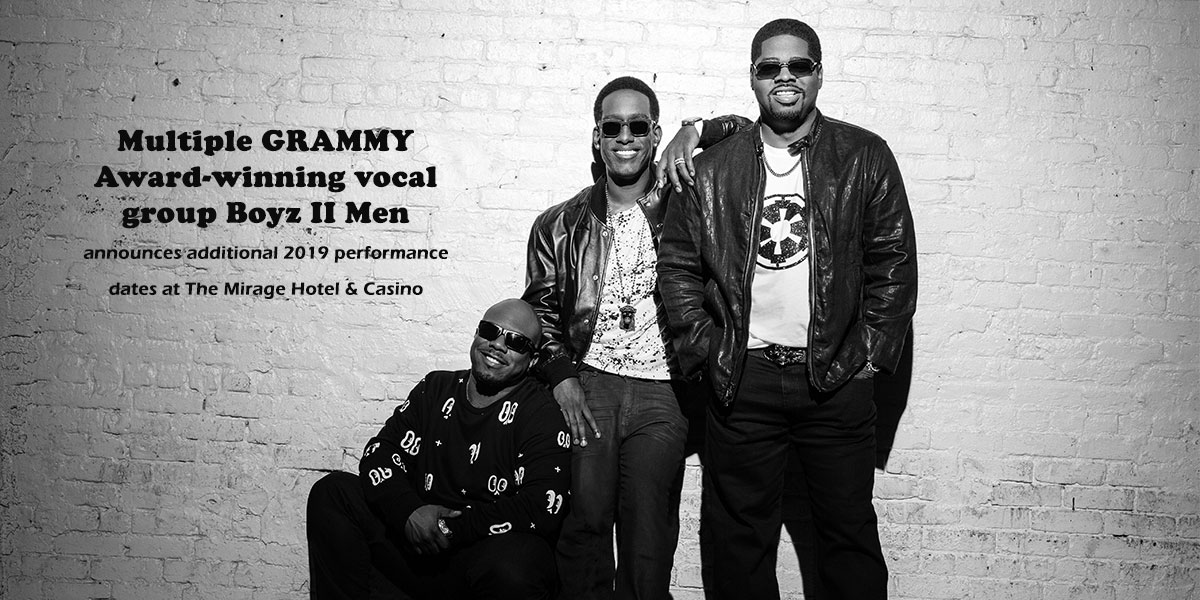 Formed in 1990, Boyz II Men holds the distinction of being the all-time best-selling R&B group having sold more than 64 million albums worldwide. The group redefined popular R&B with its smooth harmonies and timeless themes delivered through a multi-octave sound and incredible vocal styling. Shows at The Mirage are highlighted by the trio's biggest hits including "Motownphilly" and "It's So Hard to Say Goodbye to Yesterday" mixed with enduring Motown classics as well as other fan favorites.

With over 64 million albums sold, the four-time GRAMMY® Award-winning musical sensation is an iconic R&B group with hits such as "I'll Make Love To You" and "End of the Road."

For two and a half decades, Boyz II Men have given fans a rich catalogue of hits and the number one albums that have withstood the test of time. In 2012, Boyz II Men was honored with a star on the Hollywood Walk of Fame. With a long list of accolades, Boyz II Men has been featured on some of today's hottest TV shows from FOX's "Grease Live" to ABC's "The Bachelorette" and "Dancing with the Stars" to CBS' "The Odd Couple."

Their rise to success is a dream come true made possible by hard work, a brotherly bond, and an unimaginable talent and desire to continue improving their live performances, harmonious recordings and musical journey.

In 2014 the best-selling R&B group of all time received the Casino Entertainment Award for their acclaimed residency at Las Vegas' The Mirage Hotel & Casino, which has been ongoing since 2013. Last year the group opened for Bruno Mars on select dates in the U.S. Boyz II Men will be featured in the upcoming comedy with Seth Rogen and Charlize Theron called "Long Shot" which hits theaters on May 3rd.   "Our fans are so important to us and such a large part of our success," said Nathan Morris. "We wanted to provide opportunities for more personalized meet-and-greet package options, including an experience that brings them closer to us at our soundcheck, showing them a unique side of Boyz II Men."